Patna the Capital of Bihar State

Patna is the capital of the Indian state of Bihar, and one of the oldest continuously inhabited places in the world. The Buddhist, Hindu and Jain pilgrim centres of Vaishali, Rajgir (or Rajgriha), Nalanda, Bodhgaya and Pawapuri are nearby and Patna is also a sacred city for Sikhs (the tenth and last "human" guru, Guru Gobind Singh, was born here). Patna is located on the south bank of the Ganges River, called Ganga locally. Patna has a very long riverline, and it is surrounded on three sides by rivers—the Ganga, Sone, and Poonpun (also spelt Punpun). Just to the north of Patna across the river Ganga flows the river Gandak making it a unique place having four largish rivers in its vicinity. It is the largest riverine city in the world. A historical city on the banks of Ganges was nomenclated by princess Sarika, daughter of king Patliputra. The city is approximately 25 km long and 9 km to 10 km wide. The bridge over the river Ganga, named after Mahatma Gandhi, is 5850 m long is said to be the longest single river bridge in the world. The walled old area, called Patna City by the locals, is also a major trading centre. Climate of Patna :  Patna, as most of Bihar, has a subtropical climate with hot summers from late March to early June, the monsoon season from late June to late September and a mild winter from November to February

Though geographically located in the Magadh region of Bihar, many residents of Patna are natives of one of the four other regions of Bihar -Bhojpur, Mithila, Vajj and Ang, which differ only slightly from each other. Intermarriages and cultural intermixing among the people of the five regions has been so common that it may be difficult for an outsider to discern the differences. Intermixing of people is also common at the village level (e.g. resident of Gulni include people from Gaya, Ganga-par and other villages).

Family orientation in Patna : People are religious and family-oriented, and their lives are deeply rooted in tradition. The interests of the family take precedence over that of an individual. Families are generally large, though the government is actively encouraging family planning to curb rapid population growth. Extended families often live together in one home because of economic necessity. Although the culture is same among the regions, the dialects spoken are quite different. Many talented people of Bihar have emigrated for better opportunities.

Most marriages are arranged; the degree to which the children are consulted depends on the family. Marriage is sacred and is considered to endure beyond death. Weddings are times of great celebration, expense, and feasting. Ceremonies are often elaborate. In many ceremonies, the bride and groom exchange garlands and promises before they circle around a fire seven times to solemnize the marriage. Bright clothing, jewellery, and flowers are part of almost every type of ceremony. The bride's parents may still give a dowry, such as money or land, to the groom, even though the practice is illegal. This practice is called Tilak. Mostly marriages (arranged ones) are caste-based.

Marriage practices are changing as the culture is becoming more progressive. Now People are marrying people from different cultures and castes as more & more women are becoming professionals.

Patna is also known for the sweet delicacies of central Bihar including Khaja, Motichoor ka Ladoo, Kala Jamun, Kesaria Peda, Parwal ki Mithai, Khubi ka Lai and Chena Murki. These owe their origin to towns in the vicinity of Patna: Khaja from Silao, Ladoo from Maner, Kala Jamun from Vikram, Khubi ka Lai from Barh, Kesaria Peda from Gaya and Chena Murki from Koelwar, Poori from Behea. Descendants of the original family members of the cooks, called halwais in the local language, have migrated to urban Patna and authentic sweet delicacies are now available in the city itself. Unlike the Bengali sweets which are soaked in syrup of sugar and are therefore wet, sweets of Patna and Bihar are mostly dry. The mangoes of Digha, Patna are very delicious & famous.

Traditional snacks and savouries of Patna :

Sattu : powdered baked gram, is a high energy giving food. It is taken mixed with water or with milk. Sometimes, sattu mixed with spices are used to prepare stuffed 'chapattis', locally called as 'makuni roti'.

Litti Chokha :A baked round shape, made by wheat flour with stuffed sattu(litti), the combination of smashed boiled potatoes, bringals & tomatoes(chokha).

Tilkut : referred to as 'Palala' in Buddhist literature, is made of pounded 'tila' or sesame seeds (Sesamum indicum) and jaggery or sugar.

Dahi Chiwra: beaten rice, served with a coat of creamy curd and sugar or jaggery.

Makhana : (a kind of water fruit) is prepared from lotus seeds and is taken puffed or as kheer, prepared with milk and sugar.

Paan : a dessert made out of betel nuts, spices, tobacco, and certain other ingredients, wrapped in a betel leaf and had after a meal.

A variety of non-vegetarian items are also prepared by a section of the population. Fish curries are widely used by a cross section of non-vegetarian population of all social groups. Mughal cuisine are well known and widely relished in Patna. Of late, continental dishes are also catching up fancy. Various types of rolls which are also available in New York owe their origin to Patna.

Shopping is one of the favourite recreational activities of Patnaites. Numerous shopping complexes exist in Patna, including: N.P.Centre, Maharaja Kameshwar Complex, Verma Centre, Kulharia complex and Khaitan market. Maurya lok is one of the oldest and largest shopping areas of Patna. Patna market and Hathwa market are also famous shopping points of the city. A number of shopping malls have also been opened in the city.

Some of the places of interest in the city are :

The favourite Deity of the Patnaite. It is situated right in front of the Patna Junction, the central railway station of the City. Long winding queues can be seen at the temple on Saturdays and Tuesdays, the traditional worshipping days of the deity. 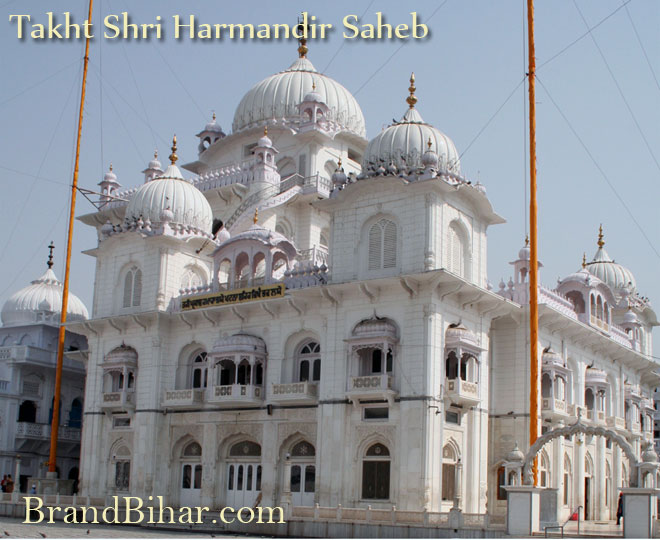 One of the largest Planetarium in Asia, the Patna Planetarium attracts large number of domestic as well as foreign tourists. The planetarium has regular film shows on subjects related to astronomy. It also holds exhibitions which attracts lots of visitors.

Shrikrishna Science Centre is the first Regional Science Centre set up by National Council of Science Museums,as an autonoums body under Ministry of Culture, Govt. of India way back in 1978. In 1996, the govt of India added one new building in its campus consisting of four galleries on the themes Fun Science, Popular Science, Evolution and Oceans. It also has an adjoining Science Park having almost 40 exhibits with which the children can play and learn the basic principles of Science. The centre also organises several educational extension activities for the students and teachers of schools. Its Mobile Exhibition Van, consisting of 24 exhibits on the theme Energy and science demonstration lectures, travels in the rural areas of the state throughout the year. Shrikrishna Science centre was visited by more than 2.12 lakh visitors in the year 2009-10. The appreciation about the centre is constantly increasing amongst the general public which is also reflected in several media report in the last one year.

Golghar :  One of the oldest British buildings in Patna.

The well-known museum has a fine collection of stone and bronze sculptures and terracotta figures of Hindu and Buddhist artists. Didarganj Yakshi is the most prized collection of this museum.

built in 1489 by the Bengal ruler Alauddin Hussani Shah

Kumhrar :  The site of the ruins of the Ashokan Patliputra.

literally the unfathomable well which is said to date back to the Ashokan period.

Saheed smarak situated near Bihar Vidhan Sabha. is a memory of seven extra ordinary students who attempted to hoist the Indian flag on the top of Bihar Vidhan Sabha in 1942 during English rule. The six were shot dead by the forces under the command of the-then colonial government of India, while the last and the seventh one was able to hoist the flag.

Shrine of Makhdoom Yahya Maneri, and his disciple, Shah Daulat, at Maner, 29 km from Patna.

This is a place of great Religious & Historical importance for Muslims.
Imarat-E-Shariya or the "Shariyat" of Patna looks after whole of Bihar, Jharkhand, Orrisa, West Bengal and all North-Eastern states.

Its Cricket Ground which is 2nd largest in India, next only to "The Eden Gardens". It holds 25,000 spectators. The first ODI was played here between Zimbabwe and Sri Lanka on 15 November 1993(Hero Cup,1993/94).Another ODI was between Kenya and Zimbabwe on 27 February 1996(Wills World Cup 1996)

built by Pervez, the elder brother of Shah Jahan and the first Mughal prince who made Bihar his residence

Sadaqat Ashram on the banks of the river Ganga [The land was donated by Mulana Mazharul Haque to the then congress party] which later became the retreat of Dr. Rajendra Prasad

Padri Ki Haveli deemed to be the oldest church in Bihar dating back to 1772.

Bankipore Club on the banks of the river Ganges. The dance hall of this club is said to be one of the original buildings built by the Dutch in the 17th century.

Congress Maidan A historic ground that symbolises the Indian independence movement in Bihar.It was used to hold meetings by great illumanaries like Rajendra Prasad,Nehru,Anugrah Narayan Sinha, Sri Babu, Jayaprakash Narayan and others. Darbhanga House also called Nav Lakha building. This was built by Maharaja Sir Kameshwar Singh of Darbhanga. This beautiful building on the banks of Ganges now houses the post graduate departments of Patna University. It houses the Kali Mandir, which has been a place of worship of the goddess, the Maharaja himself was a great devotee and the students of the Patna University rarely take an exam without offering a prayer.

Patna College administrative block building was initially part of a Dutch Opium factory established on the banks of the Ganga as a part of the flourishing Opium Trade from the northern China and Nepal region.

called the Patna Lawns during the British Raj.

Anugrah Seva Sadan It was established by Loknayak Jayprakash Narayan to serve the underprivileged masses and to serve as a care home for the poor. It bears the pious name of reverend leader Bihar Bibhuti Dr. Anugrah Narayan Sinha.

built in the memory of our brave soldier who get shaheed in kargil war.

Located in Old city of Patna. Built by Nawabs of Patna, it is an example of unique architecture of midlive time with beautiful garden of Mughal style.

12 km from Patna. Its centre for Bihar Regiment.