In this District 7 Talukas viz Patan, Siddhpur, Chanasma, Harij, Sami, Radhanpur and Sakul have been included in Patan District is situated between 20° 41' to 23° 55' north latitudes and east longitude of 71° 31' to 72° 20'. The area of Patan District is 5600 sq. k.m. In the north and north-west borders there is Banaskantha District and in the west there is the border of Kutch district. In the south and south-east there is Desert of Kutch and some part of Surendranagar District. Besides this, there is Mahesana District situated in the east part of Patan.

Places of interest in Patan, Gujarat

Its headquarters is the city of Patan, Gujarat. Apart from Patan, Modhera is also an important tourist destination.
Patan itself has few good tourist spots, to attract people interested in heritage and history. Shankheshwar Jain Temple, Sahastraling Lake (A lake of thousand Lingas) and Ranakai Vav (A deep well) are very good attractions, apart from Panchasar Jain Temple, which is supposed to have lot ancient writings belonging to Jain religion.
There are nearly 150 Jain temples still in existence. Panchar Parshwanath and Shamla Parasnath are most popular Jain temples in Patan. 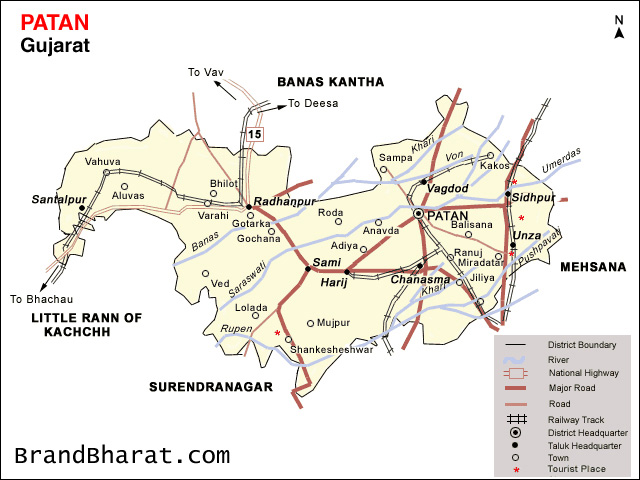