Valsad district is one of the 33 districts in the Western Indian state of Gujarat. It is bound by Navsari district to the north, Nashik district of Maharashtra state to the east, and Dadra and Nagar Haveli union territory and Palghar district of Maharashtra to the south. The Arabian Sea lies west of the district. The coastal Daman enclave of Daman and Diu union territory is bounded by Valsad district on the north, east, and south. The district's administrative capital is Valsad. The district's largest city is Vapi.
The district covers 3008 square kilometres and is divided into six talukas: Valsad, Vapi, Pardi, Umargam, Kaparada and Dharampur. In 2011, Valsad had population of 1,705,678 of which male and female were 887,222 and 818,456 respectively. In 2001 census, Valsad had a population of 1,410,553 of which males were 734,799 and remaining 675,754 were females. Valsad District population constituted 2.82 percent of total Gujarat population. In 2001 census, this figure for Valsad District was at 2.78 percent of Gujarat population.[1] There was change of 20.92 percent in the population compared to population as per 2001. In the previous census of India 2001, Valsad District recorded increase of 29.65 percent to its population compared to 1991. according to 2011 census 62.74% of population lives in rural areas and 37.26% lives in urban regions of district. Valsad is well known for its production of mangoes, sapodilla, and teak, and for its chemical and industrial stretch based on Vapi and Atul.

Places of interest in Valsad, Gujarat

Mount Parnera is home to temples and a fort of Chatrapati Shivaji Maharaj.Bagwada is home to Arjungad Fort and several temples, including a Jain temple. 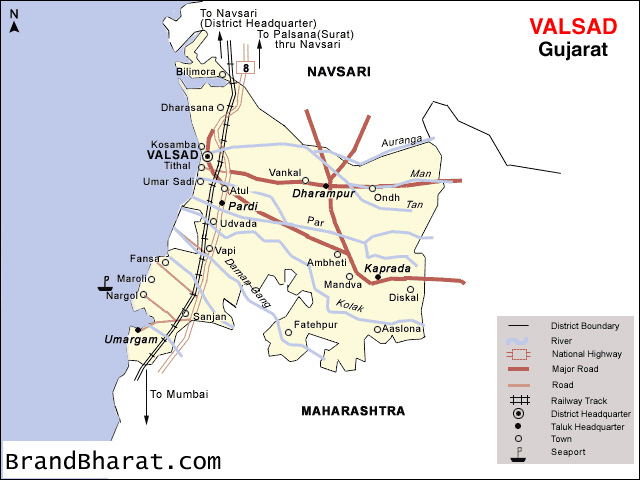