Two channels running North to South and two running East to West divide this garden into a grid of squares. There are six lotus shaped fountains at the crossings of these channels. Wheresas the energetic fountains rising upto a height of 12 feet create soothing murmur that enthralls the visitor, the channels are so tranquil in their movement that they seem frozen. In the channels at appropriate times of day can be seen reflections of the imposing building and the proud flowers. There are wooden trays placed on stands in the centre of the channels where grain is put for the birds to feed upon. 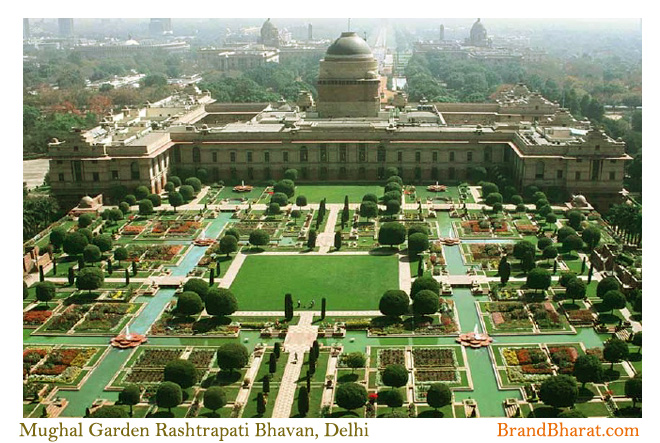 There are two big lawns, the central one is a square with each side being 45 meters and the East lawn adjacent to the building, oblong in shape and about three fourth the size of Central lawn. The lawns are covered by 'Doob' grass which was originally brought from Belvedere Estate, Calcutta when they were initially laid. The entire turf of the lawn is removed once in a year before the monsoons, new top soil is spread and it takes three weeks for the grass to grow again. In the evenings Peacock with their consorts can be seen leisurely moving around. And once in a while a lapwing can be seen meditating oblivious of the surrounding splendour. Then there are Spotbiils (Resident ducks of Delhi Region) who have made a home of the channels and the garden. They are often seen enjoying a family picnic what with gardeneres in attendance with bread rmbs and choicest greens for their repast. And then there are parrots, mynahs, dovesm piegons who bath and bask with an ease of manner that evokes envy and admiration in all onlookers. Few lucky ones have also spotted birds like cormorant, jay or a transiting stork.

Moulsri or Bakul is a typically Indian tree. Planted in the square patches of lawns along the channels and on the periphery of the two main lawns, they are pruned to look like mushrooms. They provide character and depth to the garden. They flower in the months of May and June and their mild sweet fragrance saturates the surroundings. This tree has been mentioned in the 'Sangam' literature, in the plays of the great poet Kalidasa and more recently by Abul Fazl in Ain-in-Akbari. There is an interesting details of this tree in a play by Kalidasa. The tree about to bear flowers is compared to a pregnant woman who nurtures desires for unusual things. Thus during the budding period the tree was said to have a desire to be sprinkled with mouthfuls of liquor by a virtuous maiden. This privilege was reserved for the queens and the princesses and celebrated in a royal ceremony.

Cypresses line the pavement and give a touch of formality, by virtue of their unchanging, full, erect shape. Planted axially they provide a perspective of depth. China Oranges alternate with Cypresses, and provide a welcome break from monotony. Whereas Cypress symbolises death and afterlife the China Oranges change their appearance through various stages of growth from season to season, symbolising renewal and celebration of life.

Putranjiva Roxburgi are planted around the two gazebos located at the western ends of the two terrace gardens. Not more than a skeletal structure of stone beams these gazebos are unique by themselves and in combination with the shade of Putrnajiva Roxburgi create an inviting grove of peace and repose.

Thuja Orientalis, a coniferous tree ornately hemmed in squares of well chiselled hedges of Golden Duranta presents a marvellous spectacle. This combination is placed along the periphery of the main garden and marks the various intersections and terminations in the pattern.

The following evergreen fragrant shrubs and creepers are planted along the terrace walls:

The garden has more than 250 celebrated varieties of roses, which makes it one of the best Rose Gardens in the world. It has roses like Bonne Nuit, Oklahoma which are neares to being black. In blues it has Paradise, Blue Moon, Lady X. We also have the rare green rose. The Roses ahve some very interesting names. Few Indians that have found place here are Mother Teresa, Arjun, Bhim, Raja Ram Mohun Roy, Jawahar, Dr.B.P.Pal. The international celebrities here are John F.Kennedy, Queen Elizabeth, Mr.Lincoln, Montezuma. Others worth mentioning are Christian Diar, Happiness, Century Two, First Prize, Jantar Mantar, Peter Frankenfeld, American Heritage, Bejazzo, Iceberg, Granada, World Rose, Command Performance, Imperator. The list is endless and the spectacle delightful.

Various herbaceous annuals and biennuals are grown in beds and informal borders. The beds are sited at the edge of lawns or along the pavements. Also the floweres are massed irregularly with respect to their height and grouped in colour combinations to produce harmonious, natural and pleasing effect.

The planting of seasonals is done twice a year in preparation for the "At Homes" hosted by the President on the occassion of the Republic Day( 26TH January) and the Independence Day(15TH August) every year, which are hosted in the Central lawn.

For summers the choice is rather limited. But the dedication of the gardeners and bravery displayed by the plants sees them through. The August bloom would consist of Gaillardia, Vinca, Cosmos, Zinnia, Sunflower, Gomphrena, Portulaca, Balsam, Verbena, Celosia, Canna, Cochia, Rudbeckia etc.

It is an erect evergreen tomentose shurb. 30-150 cm high. Roots stout whitish-brown. Leaves simple owate. Those found in the fortal region small opposite. Flowers inoonspiouous, light green or pale yellow, in axilary. Umbellate cymes. Fruit a berry, reddish and globose. Parts used : Roots. Major Constituents : Alkaloids and with anolides (sterodial lactones) are the major groups of the secondary metabolites of medicinal interest isolated anmd characterized from the plant. Uses : Ashwangdha is a reputed medicinal plant, extensively utilized in Indian Systemof Medicine for treatment various diseases such as leprosy, nervous disorders, intestinal affections venereal diseases, theumatism, enuncation of children and as a tonic for all kinds of weakness and also to promote vigor and vitality.

An erect, branching herb, leaves opposite, thin, peetioled, broadly ovate or elliptical or uppermost lanoeolate, acute, 15-5 cm long. Flowers small, appear in the uppermost axils and in short dense terminal spikes. Parts used : Leaf Major Constituents : The main constituents of Bergamot mint oil are linalool (50-56%) and linalyl acetate (30-35%) Uses : The main use of Bergamot mint oil is in perfumery and cosmetics. The oil is used as such in soaps, perfumes and toiletry items.

The plant is creeping succulent herb that branches profusely at nodes. The succulent leaf is sessile, opposite, decussate, obovate-oblanceolate in shape, with inconspicuous veins and produce branches in their axils. Flowers solitary, axillary with while or lilac campanulate corolla and capitate stigma. The fruit is an ovoid capsule with persistent style. Parts used : Whole plant Major Constituents : The herb contains the saponins, monnierin, hersaponin and bacosides. Uses : The plant is used in treatment of mental disorders like epilepsy, insanity and memory loss. Bacosides have been proved to be responsible for improving intellect and memory and are the basis for memory enhance property.

The plant is characterized by succulent leaves having prickles along the margin; leaves arranged in a rosette at the base on the soil. The leaves are suberect or spreading, lanceolate, acuminate, 30-60 cm long and 5-7.5 cm broad. The flowers are 2.5 cm long. Yellow to vermillion and arranged along a central axis, which may be 60-90 cm long. Parts used : Leaves, Aloe juice and Aloe gel. Major Constituents : The principle constituents of aloe is barbaloin, a 10 glucopyranosyl derivatice of aloe-emodine-anthrone, a small amount of free aloe-emodine is also present. Uses : Aloe juice, which on drying froms semiopaque. Dark-brown substance called Mussabar in Indian trade; this plant product is reputed to possess purgative action.

Large, glabrous, deciduous, climbing shrubs. Leaves broadly ovate, cordate, long petiolate. Flowers small, yellow or greenish-yellow, appearing when the plant is leafiless, in axillary and terminal racemes or racemose panicles; male flowers clustered females usually solitary. Parts used : Root, stem, leat. Major Constituents : The dry stem with bark constitutes the drug, which have different reported constituents, such as bitter glycoside Gillian a non glucoside giloinin. Three bitter compounds namely tinosporon acid and tinosporol have been reported. Uses : It is an important constituent of several preparations, used in general debility, dyspepsia fever as aphrodisiac in urinary disorders. It is also reported to provide relief in diabetes, piles and dysentery. A part from stem, the decoction of the leaves is used in the treatment of gout. The root is also powerful emetic and also used for visceral obstruction.

It is an annual herb with rosette-like leaves, 3-45 cm in length. Leaves are narrowly linear, 7-20 cm long and 4-6 mm in breath. A large number of flowering shoots emerge from the base. Shoots are cylindrical to ovate in shape and 2-4 cm in length. Flowers are white and minute. Capsule is ovate, 8 mm long with two seeds, pinking-grey brown or pinkish white in colour. Each seed is encased in a thin white transluscent membrance which is odourless and tasteless. Parts used : Seeds and seed husk Major Constituents : The isabgol husk yields a colloidal mucilage consisting mainly of xylose. Arabinose and galacturonic acid. Rhamnose and galactose are also prsent. The dehusked seeds possess yellow semi-drying oil, rich in lonoleic acid. Uses : The dried seeds and husk are mildly astringent, emollient, demulcent, lubricant and laxative, and used in the treatment of chronic constipation, amoebic and bacillary dysentery and diarrhoea.

It is an annual herbaceous of shrubby procumbent or erect plant up to one m high. The branches are sharply quadrangular, often narrowly winged towards the apical region. Leaves petiolate, 5.8 cm long and 1-1.25 cm broad, lanceolate, acute. Flowers small, solitary in panicles, with rose colour corolla, which is hairy externally. Parts used : Whole Plant. Major Constituents : The major bitter principle is a diterpene lactone called and andrographolide and non-bitter compound neoandrograph olide. Uses : The plant is extensively used in Indian Systems of Medicine for astringent, anodyne, anit-inflammatory, immunosuppressive and alexipharmic properties. Decoction fo the plant is blood purifier, used for cure of torbid liver, jaundice, dermatological diseases, dyspepsia, febrifuge and anthelminitic. Tincture of the root is tonic, stimulant and aperient. The plant is often used as substitute of chirayita (Swertia chirayita).

Annual erect plant up to 2m tall. Leaves 2-3 pinnatisect or decompound, serrate or lobulate. Inflorescence panicle (compound raceme) with capitulum. The capitula are inoonspicuous hemispherical, pendulous. Achenes surface has longitudinal striations and lack pappus. Parts used : Aerial parts /Artemisinin Major constituents : One of the economically important constituents of the plant is the sesquiterpene lactone artemisinin. The other main constituents are artemisitene, arteannuin B and artemisinic acid. Uses : The compound artemisinin has been found to be effective for the treatment of clhoroquin resistant malaria and cerebral malaria. Two semi-synthetic derivatives of artemisinin namely arteehter and artesunate have been found to be more effective than artemisinin in the clinical trails. The palnt yield essential oil after st4am distillation of fresh herbage which is widely used in pharmaceutical, cosmetics and flavouring industries.

It is a perennial herb, erect, much branched. 70-80 cm high. Leaves alliptic to obovate, rounded retuse or mucronulate at apex acute at base. Flowers in 1-4 flowered cymes. Calyx segments subulate. Corolla whitish or pinkish. Follicles 2-3 cm long, pubescnt. Parts used : Leaves and roots Major constituents : More than 100 alkaloids have been isolated from roots and leaves of this plant. The most important alkaloids having anticancer properties from the leaves are: vinblastin. The important alkaloids isolated from roots are : ajmalicine, serpentine and reserpine. Uses : The alkaliod Vinblastin is principally used for the treatment of Hodgkin’s disease., hymphosarcroma, horiocarinoma, neuroblastoma and carcrinoma of the breast lungs and tests also used against leukaemia vincristine is used particularly for the treatment of acute leukaemia,. Hodgkin’s disease, Wilm’s tumour neuroblastoma. Rhabdosacroma and reticulum-cell sarcoma. The alkaloid ajmalicine from root is used as a hypotensive and antiarrhythmic agent.