Araria is situated at the southern part of Purnia and Medhepura in Bihar. Borders of Araria are surrounded by Nepal in northern side, Kishanganj in western side and Supaul at south-eastern side. The district came into existence by division of Purnia district on Makar-Sankranti day of 1990. District border is adjacent to border of Nepal, so the district is important in terms of security. Jogbani is the last point of Araria and after that "Virat Nagar" district of Nepal starts. For transportation both train and road media's are available. Araria contains two bus terminals one at '0' mile and second in city. Buses for most of the districts are available and as well as for internal blocks too. Train facility is in the form of meter gauge track. This track ends one side to the Katihar, which is a big and important junction where from trains to all over India are available, other end of track is Jogbani the last point of Indian rail. 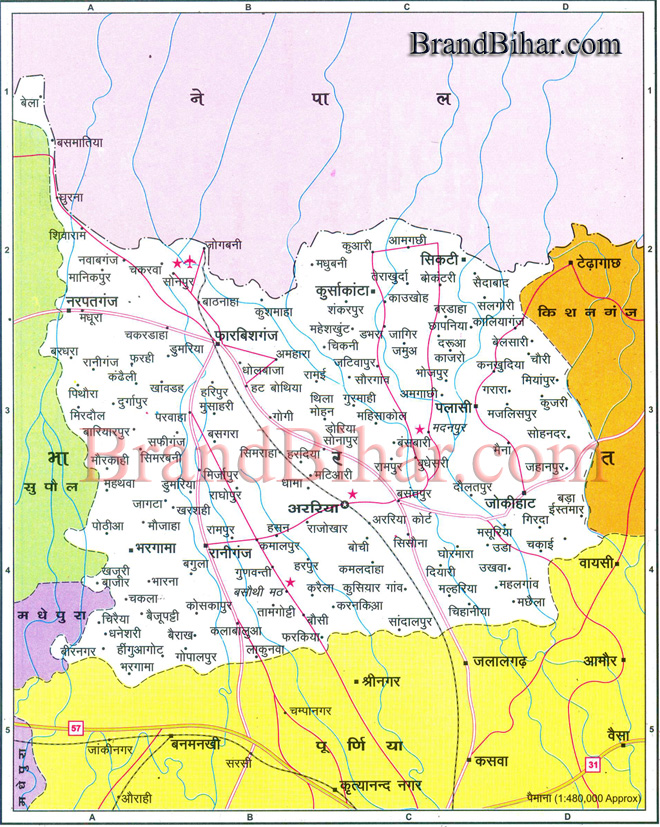 Distance of Arariya from Nepal :

Bihar Police ensures that its department has presence in Araria district headquarters and all regions strategically. The purpose is to ensure planned security in this region that shares the international broader with the neighboring country Nepal. The police force therefore works with best coordination with Border Security Forces through keeping in consideration need of country’s safety and security. The police balance its roles through hierarchic functioning from the district headquarters controlled by Superintendent of Police, Deputy Superintendent of Police and their team of Police Officers to staffs in and around the headquarters city to Police sub-stations. Araria district therefore has presence of its police force from its headquarters to all the police sub-stations to further divisions in each part of the district at reasonable distances.

Purnia division is having 4 Districts, Araria District is divided into 9 talukas

(administrative units ) and two sub-divisions as per details given below.

Places of interest in Araria

Forbesganj: It has emerged into one of the major trade centers of Araria. One of the three major urban establishments of Araria district, Forbesganj also serves as an assembly constituency in the district. This place is famous for some of the historic monuments especially the famous Mr. Forbe's Bungalow that remind of this region being controlled by the British from here. The region has taken shape of an urban locality where good grains business has flourished. It is well connected to rest parts of the state and country by road and railways. Train and bus services between Forbesganj and Araria connect to these prominent cities in the region. One can travel for few hours to reach there. Sultan Phokher in Forbesganj is very famous place.

Palasi: It offers complete rustic impression to visitors. As a notified area in Araria district, Palasi also serves as one of its blocks located at a distance of 28 km northeastern side from the district headquarters Araria city. It is completely rural region where the source of income is only from agriculture. Koshi and Bakra rivers pass through Palasi region which is best to explore for those willing to encounter rural lifestyle.The roads leading towards Palasi from district headquarters Araria connect it with the administrative headquarters. Intercity local buses operate on this route.

Jokihat: It is developing into one of the few semi-urban establishments in Araria. It is one of the assembly constituencies of Araria district. The road from Zero Mile in District headquarters Araria leading towards neighboring Kishanganj district connect to Jokihat in the midst. It is best connected by the roadways.

Sikti: It is one of the areas in Araria district of Bihar in its semi-urban stage. It is district’s one of the assembly constituencies. Roads from district headquarters Araria connect to Sikti. Local buses operate on the roadways.

Dainiya: This is one of the destinations in Kosi Zone of neighboring country, Nepal. Located in the Morang district of southeastern Nepal, Dainiya is known for its greeneries. Ancient temples are also located here. Travellers travel up to Jogbani Railway Station or they can even choose roadways to enter into Nepal to avail the local bus service in neighboring Nepal to reach Dainiya which can be reached in mere few hours.

Raniganj: Though a small place and assembly constituency Raniganj is mainly a semi-urban establishment where people are primarily involved in the agriculture related activities. Those willing to travel to Raniganj can take local bus service taking them from district headquarters.

Jogbani: It lies on Indo-Nepal border and is visited by numerous tourists every year. The city of Jogbani is famous tourist center cum trade destination in the region. India’s last railway station at the end point bordering Nepal is at Jogbani. This town and notified area under the administration of Araria district is one of the few urban establishments in the region. It is also strategically important for the country related to security issues. Its sister city across the border is Biratnagar in Nepal that can be reached easily by walking for mere few minutes. As a gateway to the Biratnagar city of Nepal, this city under Araria’s administration also houses India’s customs checkpoint for goods at the border where Indian and Nepalese nationals can cross without any restrictions. People from various nationalities are commonly seen here. Those travelling to Jogbani from Araria have railways and roadways service to use for this purpose. It takes few hours to reach there.

Being a hub of local business and trade, Araria has welcomed the establishment of many regional and nationalized since decades. The region has seen the establishment of many private banks in the recent past. Although regional and nationalized bank branches have their dominance in this region but with the establishment of few private banks, banking sector has got tough competition in this region. These banks offer banking related services from cash withdrawal to loans and various other tasks which are the indicators of strong economy. Most of these banks operate with their branches and ATMs spread in different parts of the district. Here are the bank branches operating from Araria district headquarters.

Being a rural establishment the entire Araria is well connected through chain of postal department offices throughout the region. Post offices are located at particular distances keeping in consideration the postal services needs of villagers. These offices play crucial role to support the masses in various types of communication infrastructure. Sending or relieving parcels, letters and money orders etc. becomes easy through the Indian postal department. Urban area of Araria like Araria city, Forbesganj and Jogbani are the places from where private courier services are also popular. They offer best services for the national and international courier services.

Insurance provides great economic security to masses by ascertaining that they are given best financial security. The advantages of buying insurance policies are that the families of lives insured don’t face any financial hurdle and accustomed life is maintained in case of any mishap. 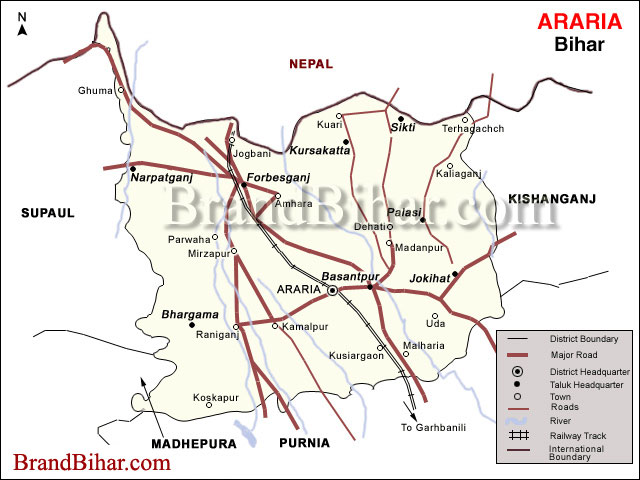