Arwal district was earlier a part of the Jehanabad district and it came into existence in September 2001. This is the thirty-eight District of Bihar.

Arwal is situated 60 km south of Patna. The nearest airport is at Patna from where regular flights are available to all important towns and cities across the country. The nearest railway station is located at Jehanabad. By road, Arwal is efficiently linked with Jehanabad, Patna and Bhojpur 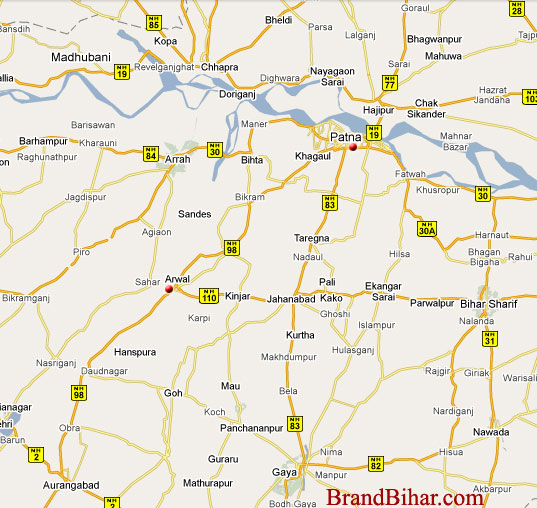 Places of interest in Arwal

Madhushrava - The place of Chyavana rishi.He was son of Bhrigu and is known for his rejuvenation through a special herbal paste known as Chyawanprash, which was first prepared for him some 10,000 years ago, at his Ashram situated in Madhushrava.Chyavana is mentioned in the Rigveda as Chyavāna (च्यवान). He is described as an aged and feeble person whose youth and strength was restored by the twin Ashvini Kumar brothers, who were the Rajya Vaids or 'State Doctors'. According to a hymn of this text (X.61.1-3), Chyavāna seems to be opposed to Turvayana, an Indra worshipper Paktha king as he was closer to the Ashvins. According to one tradition, he married Vaivasvata Manu's daughter Arushi and their son was Aurva. According to another tradition, he married Sukanya, daughter of Vedic king 'Sharyati' and granddaughter of Vaivasvata Manu. They had two sons Apnavana and Dadhicha. He is also considered as father of Harita.

There is a very old temple of lord Shiva Situated on the bank of a big pond.