The topography of the district is of diverse nature. Some parts are hilly and some are plain areas. Chakai, Sono, Jhajha, Khaira, Giddhour and Jamui Blocks are having a bulk of hilly terrain. The total geographical area of the district is 3,122.80 square km. The cultivable land is 3,05,289 hectare out of which, 76,955 hectare is under cultivation. The non cultivable land is 1,49,602 hectare, whereas the forest cover is 38,685.49 hectare.

The climate of the district is also of diverse nature because in some parts, it is very healthy and pleasant whereas some areas face extremes of the climate.

The average annual rainfall of the district is 1,102.9 mm. In summer, the average maximum temperature is 41ºC and avg. minimum is 28ºC and in winters it is 27ºC and 13ºC respectively.

Places of interest in Jamui

The tower was erected in commemoration of Lord Minto, the then Viceroy and Governor General of India, who visited Giddhaur on 10th Feb 1906. The tower was constructed by Maharaja Rameshwar Prasad Singh ‘Bahadur’ of Giddhour. Minto Tower is situated at Giddhaur block head quarter, which is 15 K.M East from the district head quarter.

This Temple of goddess Kali is situated at Malaypur village, block Barhat. A very famous festival known as Kali Mela is held every year at this place. The temple is just near the Railway station, Jamui.

This is a large and old rest house(Dharmsala) of 65 rooms constructed for the Jain Pilgrims. There is a Mandir of Lord Mahavira inside the Dhamsala. This is situated on the way of kshatriya Kund Gram, the birth place of Lord Mahavira. This place is in Sikandra Block which is approx 20 Km. west from Jamui Dist. Head quarter.

This is a famous religious place of Jains. It is supposed to be the birth place of Lord Mahaveer. There is a beautiful temple of Lord Mahaveer is situated at this place. This place is 15 kms south of Lachchuar.

This is famous temple of lord Shiva situated on the top of stone boulders. It is15 Km south from the district head quarter.

This place is situated 20 km north of Jamui. This is supposed to be the birth place of Suvidhinath, the 9th Tirthankara of Jains. Thousands of pilgrims use to visit this place every year.

This is supposed to be the capital of the last local king of Pala dynesty,  Indradyumna of 12th century. It was earlier known as Indraprastha. Many archaeological evidences have been found at this place.

There is a old Devi temple, which is known as Natla Than. It is also a pilgrimage for Jains. This place is situated in Sikandra Block.

This place is famous for its beautiful scenic hills and pleasant weather. It is supposed to be the Tapobhumi of Sri Ram Krishna Paramhans,  who founded TaraMath of Devi Bhagvati.

It is just over 1000 feet above sea-level, and its healthy climate and picturesque surroundings have made it a popular health resort with Bengalis. It is situated on undulating ground, partly gravel and partly sand, and owing to the slope is rapidly drained. To the north and west are pretty little hills of diverse shapes; and the climate is always coller than in the low alluvial lands of the district.

In 1894 Mr.Surendra Nath Banerji, Editor of the Bengalee, came with his family to Simultala and occupied one bungalow. He saw the adventages of the place as a sanatorium and health resort.

The first masonry house was built in 1897,and a number of others were erected in the next ten years.

Simultala has a wide reputation among the Bengali community as sanatorium for the cure of malicious fevers and diseases of the lungs, and many people come here for a change , the season beginning about the month of October and continuing till the close of the cold weather.

Simultala used to attract a large number of visitors twice in the year. Calcutta doctors used to prescribe a change at Simultala for recouping health. The price control measures scared away the visitors and during this period there was a certain amount of criminal activities. The high prices of the essential commodities made the employment of the caretakers and malis of the houses rather expensive.

A visit to Simultala now has a depressing effect because it shows lakhs and lakhs of rupees lying waste in beautiful untenanted houses falling into disrepairs.

About four miles in the south-west corner of Simultala there is one Haridiya fall which serves as a sight scene place for the changer coming to Simultala.

A village in the Jamui District situated about five miles west of Somaria and four miles south of Sikandara. It contains a large Jain temple and dharmasala built in 1857 by Raj Dhanpat singh Bahadur of Murshidabad, for the benefit of Jain pilgrims, who visit some places in the adjacent hills. The nearest are three mikes south of Lachhaur and are marked “Muth Boodhroop” and “Muth Purusnath” on the Indian atlas sheet. They are two small shrines picturesquely situated in the valley between two parallel ranges of hills. In each of these shrines is a small statue of Mahavira, one of which dates back to Sambat 1505, while the other appears to be older. The temples themselves, however, are of recent date. Some  Jains hold Lachhaur to be the birth place of Mahabir Swamin ,the 24th  Tirthankar of the Jains.

Lachhaur is said to have been several centuries ago the residence of Puran Mal Raja of Gidhaur, who built the temples mentioned in the account of Simaria. On the outskirts of the village there is a temple dedicated to kali. 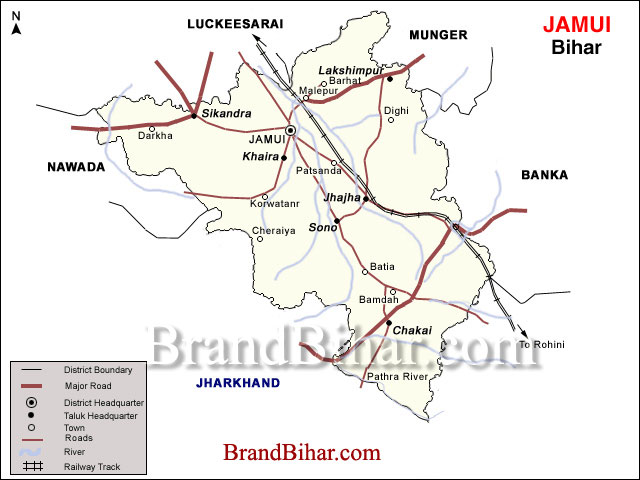