So far the Communication is concerned, this district is linked with meter gauge Rail of Eastern Central Railway. The district is located on Katihar, Saharsa, Khagaria broad gauge Rail Section. In addition to Rail link it is connected with state H.Q.by road that starts from NH 107 at Madhepura and ends at Baijnathpur situated in between Madhepura and Saharsa link road at the distance of 14 KM from Madhepura. 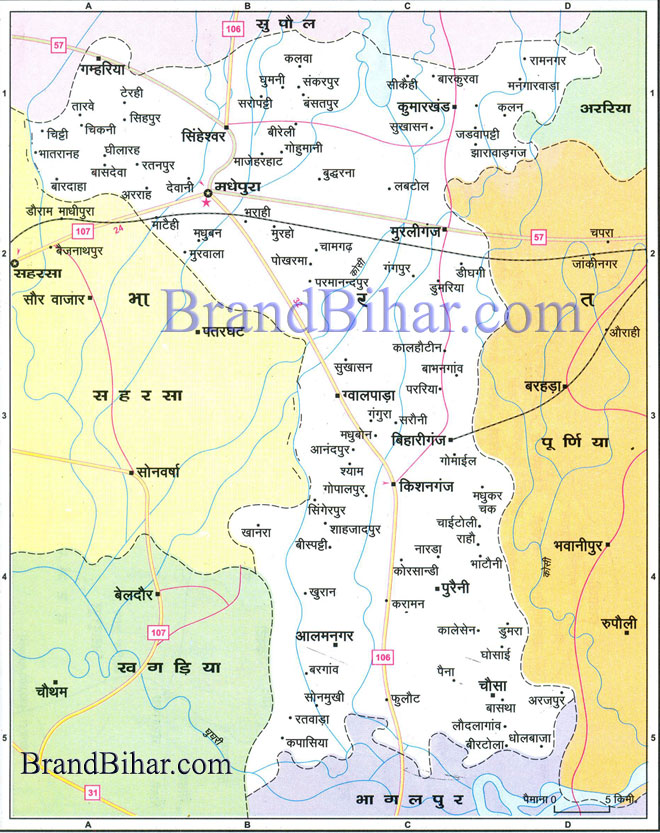 Places of interest in Madhepura

Singheshwar sthan is also a famous pilgrimage of lord Mahadeo in the country. It is situated of the distance of 8 km from Madhepura Distt. H.Q. and is renowned for its historical and religious importance. “Maa” Bhawani is called as singheshwar and lord shiva as singheshwar here Devotes not only from Bihar but also from other parts of the country including the neighboring country Nepal come to singheshwar sthan for the worship of lord Shsiva. Some days of the week such as Sunday, Monday & Wednesday are much important for the devotees. Mahashivratri mela of singheshwar sthan is famous in Bihar and trai area of Nepal also.

There are a lot of interpolations or myths regarding the emergence of this religious place which was once upon a time the tapobhoomi of the great sringi Rishi. This place has been famous silence the emergence of idol worship in the pauranic period. Pandit Jharkhandi Jha in “Bhagalpur Darpan” has glorified the religious aspect of this place.

Reference of Singheshwar sthan has been found in Barah puran too. According to that puran once this place was infested with deep forests. Cattle roamers used to come regularly at that place with their cattle. During the course of grazing one virgin cow used to sprinkle milk from her breast on a particular place. The cattle roamers saw the & charismatic action of that cow one day a began to dash that place. After digging he got a shivlilya there if being filed up with religious feeling began to worship.  Gradually people become a ware of this happening and in course of time a small temple was constructed these with the contribution of the dew tees of here Shiva.

Another reference of Barah puran is also quoted here. Once herd Vishnu, Brahma and Indra  visited kailashpuri with a view to discuss some important aspect of world affairs, but unfortunately Lord Shiva was not there. They searched a lot but ultimately returned hopelessly. During the course of return journey the intuitional telepathy indicated them that Lord Shiva in the guise of a deer is residing in a lonely place of the deep forest. The omniscient Lord identified the unique dear adorned with unparalleled beater in the guise of lord Shiva and captured him after continuous attempt. The Tridevas hold the horn (sing) of the deer in three parts. Lord Indra holds the upper portion, Lord Brahma the middle and Lord is Vishnu the lower portion of that horn. But suddenly that horn broke in to three parts. Tridevas got one- one part of that horn and Lord Shiva disappeared. Then a forecast was heard that Lord Shiva will not be visible at present. Consequently Tridevas were bound to be satisfied with that very part of the horn. It is said that Lord Indra established that horn in the heaven, Lord Brahma in the same place and Lord Vishnu established that horn in Singheshwar for the welfare of the human being. Owing to that event Lord Shiva is worshipped through Vaishnav Cult here. The author of “History of Baba Mahathya of Singheshwar hat” has explained the historical and religious aspect of Shiva Temple at Singheshwar asthan.

It is also said that during the Ramayana period a purashthee Yagya was done by Raja Dashratha were as he blessed with four sons’ from the Prasad “Charu” of that mahayagya. The great Sringhi Rishi primarily worshipped Lord Shiva on the occasion of that Yagya. Seven “Havana Kunds” created of that time has been converted into a ravaged tank now. During the course of time the residential place of Sringi Rishi became famous as Singheshwar. Which later on popularly called as Singheshwar?

Another mythical story behind this place is that Goddess Maha Kali, Maha Laxmi & Maha Sarswati are assimilated into the form Goddess Durga and she being lion rider is called Singheshwari. Her counterpart Lord Brahma. Vishnu & Mahakal Sankar are assimilated into the form of eternal god is called Singheshwar. Three part of the Shivling is the expression of Trimurti. It is said that pundit Mohan Mishra was residing was and a scholarly debate on religion was held between Madan Mishra and Adi Sankaryacharya. After that debate Pt. Mandal Mishra adopted the cult sanatan. Lord Buddha’s’ statue of Awalokishwar on the southern wall of the eastern-sided temple shows the acceptance of Lord Shiva’s eternal Omnipresence.