Madhubani is situated 60 km south of Patna. The nearest airport is at Patna from where regular flights are available to all important towns and cities across the country. The nearest railway station is located at Madhubani. By road, Madhubani is efficiently linked with Madhubani, Patna and Madhubani

Madhubani District is under Earthquake Zone 5.

Land under Non-agricultural use In Madhubani District - 51273.24 Hect 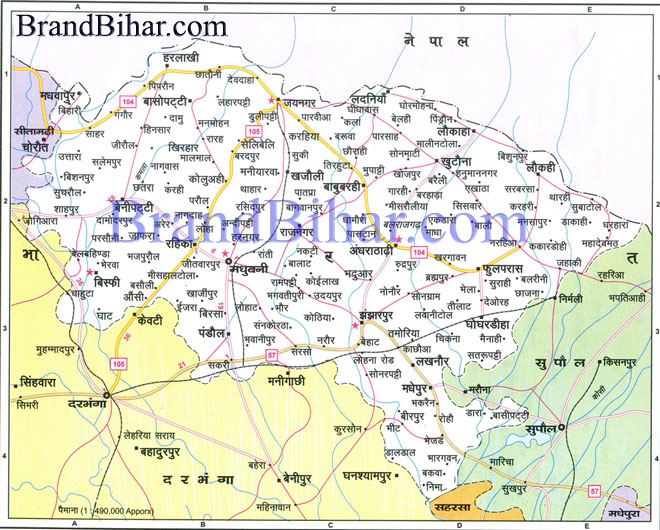 In Madhubani District Rainfall Varies between 900mm and 1300 mm.

The district consists of a vast low lying plain intersected by numerous streams and marshes, but traversed also in parts by upland ridges. The land is generally high, specially in blocks of Benipatti, Madhubani, Jainagar, Ladania, Laukaha and in the south of Phulparas, which contain stretches of highland. The soil of the district is highly calcarious. It is a mixture of clay and sand in varying proportions. In the major part of the district, clay or matiari is mostly found. This contains negligible proportion of sand and since it can retain moisture, it is suited to paddy cultivation.

In shape, the district resembles a parallelogram, its mean breadth from west to east being a little greater than its mean length from north to south. It consists of a rich alluvial plain intersected by numerous rivers and streams issuing from the Nepal hills and running almost parallel to each other from north to south. The important rivers of the district are the little Baghmati, Kamla, Kareh, Balan and Tiljuga. The little Baghmati enters the district at Bishanpur Agropatti about 16 Kms. west of Benipatti, and after being joined by its tributary the Dhaus near Bankatta, in the same block takes a south- easterly course. The Kamla river flows south-ward from the hills and falls into the little Baghmati. This river frequently changes its course and its beds are found all over the north of the district. To the east of this river are little Balan and the Balan proper and the Tiljuga which skirts around the eastern boundary of the district.

The climate of this district is generally healthy. There are three well marked seasons, viz, a pleasant cold season, a hot, dry summer and the rainy season. The cold weather begins in November and continues up to February, though March is also some- what cool. Westerly winds and dust storms begin to blow and the temperature goes up to about 42oC. Rains set in towards the middle of June when the temperature begins to fall and humidity rises. Though the rains continue till the end of September or the middle of October, these months are not so hot.

Madhubani district gets more rain than its adjoining district. The rainfall in Madhubani town is nearer the district average. The rains usually start in the middle of June. The maximum rainfall occurs between the second half of July and first half of August. The average annual rainfall in the district varies between 900mm and 1300 mm. in a year. The district also gets some winter rain.

The land in the district is mainly low and produces one crop in a year, and so the necessity for high cultivation does not arise. In a year of good rainfall no one would think of leaving rice lands fallow, and indeed, rice lands positively deteriorate when left uncultivated, as they become baked and hardened, the ‘ails’ or partitions between the fields become broken, and the drains by which the land would be usually irrigated get filled up or obliterated.

So far as agricultural production is concerned, the district is mainly a paddy and sugar-cane growing area. The staple food consists of rice, dal and vegetables. Murhi (fried rice), gur, chura and curd constitute their favourite refreshment.

Madhubani, like other districts of North Bihar, is dependent for its crops on the local rainfall. The failure or premature cessation of rainfall is a disaster for the winter crops (especially rice) which is the main crop of the district. A considerable part of the district is flood–prone. The standing crops are also affected by heavy rains as well as water flowing out of Nepal territory.

Artificial irrigation is also practiced in the district though its full potential has not been realized. There the numerous streams and rivers which intersect the district are utilized for the supply of water to the winter rice crop especially in Khajauli and Phulparas blocks. In Benipatti block nearly one third of the net cropped area is irrigated from a complete systems of ‘pynes’ or artificial channels led off from the Kamla river. Besides these sources, tanks are used all over the district for the irrigation of the fields in their neighbourhood, either to expedite the transplantation of the winter rice seedling or to prevent them from withering during a break in the rains. Tube-wells and artesian wells are also being utilized for the purpose of artificial irrigation.

Spinning and weaving are very old and highly developed handicrafts in the district. The Khadi Gramodyog Centre located at Madhubani is famous for weaving. There are still Maithili ladies who spin fine yarn and can weave beautiful textiles. It is said that some of them can spin the length of yarn needed for the sacred thread (janau) and put it in the capsule of a cardamom. This speaks of the high quality of the handloom textile of the district. The famous Madhubani Painting or the Mithilia Painting as it is known is also the handiwork of the people especially the women of Madhubani.

The District Gazetteer of Darbhanga (1962) mentions, that rearing of cattle is an important subsidiary occupation of the district. The district is well stocked with cattle, and the Khajauli and Phulparas blocks contain a large number of milch cattle, draught cattle and agricultural stock of all kinds. A number of veterinary hospitals and dispensaries have been opened at different centres in the district which has reduced the mortality of cattle.

The district has a well-knit communications system. It is served by the North Eastern Railway. A bus Depot of the Bihar State Road Transport Corporation is also functioning at the district headquarter. Before that private buses used to ply in major parts of the district. The district is covered by broad gauge railway between Darbhanga and Jainagar, Darbhanga to Nirmali and Darbhanga to Laukaha. A landing ground for aircraft has also been constructed.

As regards trade and commerce, this district exports fish, handloom cloth, makhana (Water berries), mangoes, sugar-cane , litchi, paddy, and brass metal articles to various cities insides and outside the state. It imports medicine, machine, fine clothes , shoes, and cosmetic materials from other places. A number of rice mills and timber saw mills have been set up in the district . Madhubani has been an important centre for trade with Nepal since the latter part of the 19th Century. The principal items of export from Madhubani to Nepal are cotton, sugar, silk, betel nut and tobacco.

Places of interest in Madhubani

Madhubani has a number of places having tourist interest from religious, historical and archaeological point of view. Some of the prominent places are Andhratharhi, Balirajpur, Mangrauni, Ucchaith, Bhawanipur, Saurath, Satghara, Bisfi etc. Brief Description of Places of Religious, Historical and Archeological Importance in villages and places and tourist interest in the town of the district:

This is a road side village on Madhubani-Jaynagar road and contains a temple known as Somnath Mahadev. It owes its importance to the annual Sabha held by Maithili Brahmins for negotiating marriages. Many Panjikars who keep the genealogical records of the different families reside here and outside.

A village situated nine kilometers from Madhubani District Head Quarter. The village is noted for its Shiva Temple, also known as Kapileswarsthan. Numerous devotees congregate at the temple every Monday and particularly in the month of Shravan. A large fair is also held on the occasion of Maha Shiva Ratri.

The village in Benipatti block is noted for its temple of Bhagwati on the western bank of river Thumne. According to a legend, the renowned Sanskrit poet and dramatist Kalidas was blessed by Bhagwati at this place.

It is a large village situated 5kms from the block headquarter of Pandaul, the village is noted for its temple of Ugaranath and traditional association with famous poet, Vidyapati. As the legend says, Vidyapati was such a great devotee of Lord Shiva that the latter began to serve Vidyapati as his servant named Ugana.