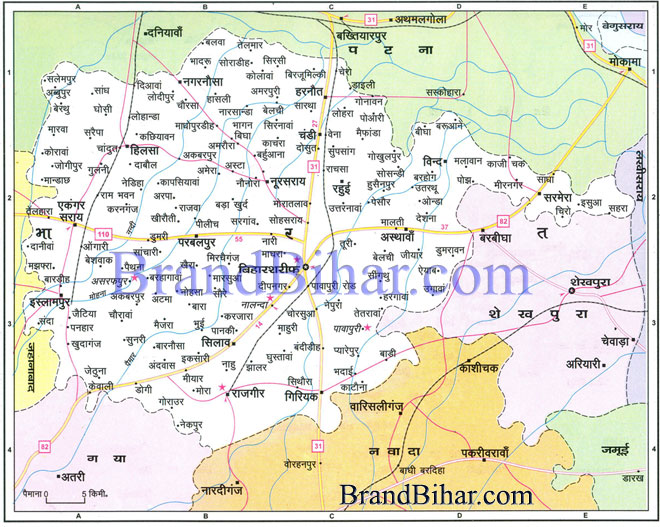 How to Reach  Nalanda District

How to Reach  Nalanda District By Air

The nearest airport from Nalanda is Patna which is about around 89 km away. There are regular flights from Patna to Kolkata, Delhi, Ranchi, Mumbai, Varanasi, Lucknow, and Kathmandu.

How to Reach  Nalanda District By Rail

Rajgir, 12 km away, is the nearest railway station from Nalanda. There are several passenger trains running between Rajgir and Patna daily. The nearest major railway point is Gaya around 65 km away, from where one can board trains for Delhi, Kolkata, Varanasi, and some of the major centers in eastern India.

How to Reach  Nalanda District By Road

Places of interest in Nalanda

The total area of the excavation is about 14 hectares. All the edifices are of the red brick and the gardens are beautiful. The buildings are divided by a central walk way that goes south to north. The monasteries or "Viharas" are east of this central alley and the temple or "Chaiyas" to the west. The Vihara-1 is perhaps the most interesting with its cells on two floors built around a central courtyard where steps lead up to what must have been a dais for the professors to address their students. A small chapel still retains a half broken statue of the Lord Buddha.

The enormous pyramidal mass of the Temple no .3 is impressive and from its top commands a splendid view of the entire area. It is surrounded by smaller stupas, many of which studded with small and big statues of the Lord Buddha in Various poses or "Mudras".

Opposite the entrance to the ruins of the university and houses, there is a small but beautiful collection of Buddhist and Hindu bronzes and a number of undamaged statues of the Lord Buddha that were found in the area. Two enormous terra-cotta jars of the first century stand intact behind the museum in a shaded enclosure. The collection includes copper plates and stone inscriptions, coins, pottery and samples of burnt rice (12th century AD) found among the ruins here.

Nava Nalanda Mahavihara is devoted to study and research of Pali Literature and Buddhism. This is a new institute, where students from foreign countries also study.

A new construction in memory of the great Chinese traveler, Hieun Tsang.