Saran district is situated between 25°36' and 26°13' North latitude and 84°24' and 85°15' East longitude in the southern post of the newly created Saran Division of North Bihar. The Ganges constitute the Southern boundary of the district beyond which lie the districts of Bhojpur and Patna. To the north of Saran lie districts of Siwan and Gopalganj. The Gandak forms the dividing line with vaishali and Muzaffarpur district in the east. To the west of Saran lies district of Siwan and the district of Balia in Uttar Pradesh, the Ghaghra constituting a natural boundary between Saran and Ballia. The district is shaped like a triangle with its apex at the confluence of  boundary of Gopalganj district and Gandak-Ganga river there are three rivers namely the Ganga, Ghaghra, Gandak which encircle the district from south north east and western side respectively. The district is entirely constituted of plains but there are quite a few depressions and marshes, which cause the formation of three broad natural divisions.

I.  The alluvial plains along the big rivers which are subjected to  periodic   inundation and prone to floods.

II.  The region of uplands away from the rivers and not subject to  floods.

III.  The diara areas in the beds of the great rivers.

Out of twenty blocks in the districts, Six blocks viz Sonepur, Dighwara, Revelganj, Chapra, Manjhi and Dariyapur are affected by floods regularly. There are six partially flood affected blocks Viz.  Garkha, Parsa, Marhoura, Amnaur, Jalalpur, and Ekma. The remaining blocks are free from floods.  The soil of the district is alluvial. No mineral of economic value is found in the district.

The place is situated about 37 km east of Chapra and 4 km west of Dighwara. It is said that in ancient times there was a Dirgh dwar near Dighwara Railway station and the place came to be known as Dighwara. In Aami there is an old temple known as Amba asthan . Near the temple there is a garden and a deep and broad well in which water remains all over the year and it never dries up. The believer from far off come to pay oblation in the established in her memory over this Yagya Kunda. The believers from far off come to pay oblation in the Navratra of April and October. Water offered here by lacs of People vanishes in the Kunda.

Internationally famous for the large fair held on the occasion of Kartik Purnima, it is also the head quarters of Sonepur Anchal. Sonepur is a Nagar Panchayat and is noted for its Railways platform which is one of the largest in India. So far as religious aspect of Sonepur Mela is concerned, special significance is owing to the temple of shree Hariharnath and the site of the battle of Gaj-Grah and rescue of the former by Hari During Kartik Purnima Ganga Snan or ceremonial bathing in the Ganga is held by Hindus to be unusually efficacious. On the day of full moon (Kartik Purnima) immense crowd assembles and take bath. The Mela commences on that day and lasts for more than a fortnight.

The Shiva temple, Kali temple and other temples and historical religious monuments are situated here and social and economical activities are at the highest peak during the Mela period. People come here to pay their oblation to the lords and thus its importance is not within Sonepur of Bihar rather it is of India and world fame.

This place is situated towards north of Parsagarh where   many exhibits of archaeological importance can be seen. On the bank of river Gandaki and ancient temple of Bhagwan Dhadheswar nath is situated in which a gigantic Shiv Ling of stone is there

The Ashram of Gautam Rishi is situated 5 km west of Chapra As per religious belief the purification of Ahalya was meted out here. In the epic Ramayan, there is mention of Gautam Rishi who had cursed his wife who turned into stone.

This is an important place as per the child Episode of Shiv Puran and Ram charitra Manas. The mohbhan of Narad depicts the place to be here. This ancient place is 28 km away from Marhowra. On every Shivratary mela is organized here during which the devotes of Baba Shilanath come to pay their obeisances.

Chirand is situated 11 km south east of the district headquarter near Doriganj Bazar at the north bank of river Ghaghra. The result of the excavation there reveals about four thousand years old developed culture of Pashan age. Inhabitants of Chirand were engaged in Animal Husbandry, agriculture and hunting. In whole of India new Pashan age culture was firstly revealed here.  Chirand had become an important urban place. 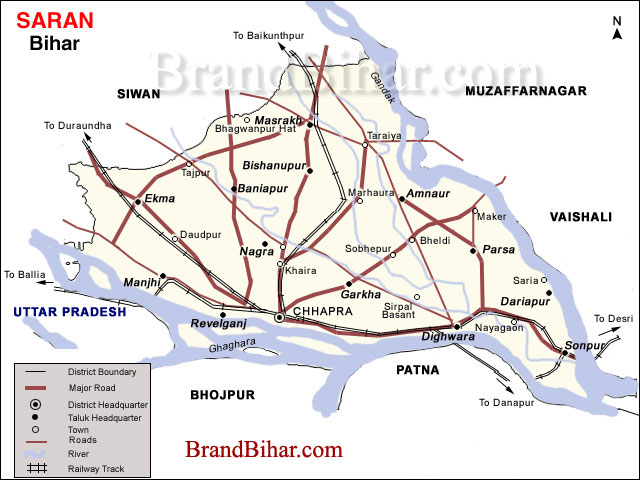