Siwan, situated in the western part of the State, was originally a sub-division of Saran District, which in ancient days formed a part of Kosala Kingdom. The present district limits came into existence only in 1972, which is geographically situated at 25º35 North and 84º1 to 84º47 east. The total area of the Siwan district is about 2219.00 Sq. Km. with a population of 21,56,428 as per the 1991 census. The district is bounded on the east by the Saran district, on the north by Gopalganj district and on the west and south by two districts of U.P. viz. Deoria and Balia respectively. 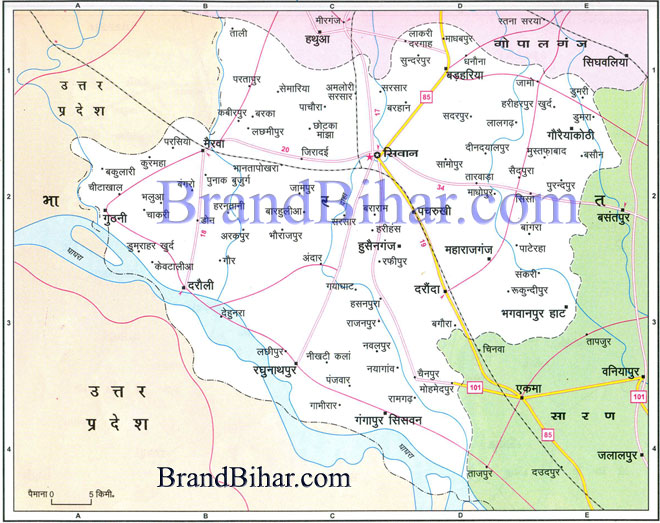 The District Siwan is spanned over the western part of North Bihar alluvial plain's segment of broader Indo-Gangetic Plain. The geographical location of the district is confined between 250 53' to 260 23' North latitudes and 840 1' to 840 47' East longitude. The Deoria district (U.P.) bound it from west, the Gopalganj district from north, the Saran district from east and by the river Ghaghara (Gogra or Sarayu) from south, beyond which lies the district of Ballia (U.P.). The district is constituted of 15 (1991) Anchals (blocks) covering an area of 2219 sq. km. (856 miles) with a population of 2170971 according to 1991 census. This administrative unit embraces only 1.27 percent of area and 2.54 percent of total population of Bihar. It comprises of 1437 inhabited and 101 uninhabited villages. As regards the sex ratio in the district, 1069 female population comes to per 1000 male population.

Structurally the district forms a part of the alluvium of the broader Indo-Gangetic Plain. The geological formation of the tract is of recent (Holocene) period. The contribution of the Himalayan Rivers to the formation of the tract is significant. It is estimated that the district covers the deposits of alluvium more than 5000 feet depth. geo-morphologically it forms the part of the Gandak cone which is the outcome of the discharge and silt-charge of the Himalayan rivers to the plain during the phase of deposition. The whole district bears a featureless terrain having general slope from northwest to southeast. The slope is almost imperceptible averaging only 8 inches a mile. The datum line of Siwan, the district headquarters, is 64 metres (210 feet) from the sea level.

The district is drained by few small rivers like Jharahi, Daha, Gandaki, Dhamati (Dhamahi), Siahi, Nikari and Sona. The southern boundary of the district is formed by river Ghaghara, the main stream of the area. Among these, Ghaghara is the only perennial river because of its Himalayan source and rest rivers bear different origins. The rivers of the district get inundated almost every year. The area is characterised by certain typical features like 'Chaurs', some of which give birth to short length streams locally known as 'Nadi' or 'Sota'. The rivers Jharahi and Daha are the tributaries of river Ghaghara, while Gandak and Dhamati are of river Gandak. The Siahi and Nikari streams drain to Jharahi, While Sona drains to river Daha. These streams play important role in carrying out excess water during rainy season. Siwan, the district headquarters, is located on the eastern bank of river Daha.

The southern part of the district along river Ghaghara is marked by ‘Draras’, which are typical formation of the sand heaping with thin layer of clay and silt over them. Alluvium and dilution Rae the important works of river Ghaghara in this part, where by boundary problems are created leading to transfer of land to and from the district.

The district of Siwan falls in the area, which occupies an intermediary position between the Bhanger plain of Uttar Pradesh and Khader plain of West Bengal. ‘Bhanger’ ( or Banger ) is the older alluvium containing heavier soil with greater clay proportion, while Khader is the newer alluvial deposit by rier floods, Both types of soils are found in the district, but Khader is limited to the vicinity of the rivers where it is periodically renewed by fresh deposits, especially in “DIARA” areas. Khader is locally termed as 'Domat' and ‘Bhanger’ as 'Balsundari'. The Bhanger contains nodular segregations of carbonate of lime known as 'Kankar'.     The soil is in many places sulfurous and extraction of saltpeter has long been an important industry. The saltpeter industry has disappeared with the march of time and changing phase of development.

The district gets its place in the transitional zone of drier climatic condition of Uttar Pradesh and moist climatic condition of West Bengal, but nearness to U.P. gives way to experience comparatively drier climatic condition. The area observes hot westerly winds which start in March and last till May, but in April and May light, damp easterly winds blow intermittently and afternoon storms accompanied with rain take the place of the rainless dust storms of U.P. The summer season experiences 'Loo' during May and June having temperature above 1000F (380C), Since the district is in transitional zone the Monsoon rain starts late here, but earlier than U.P., and persists till September. This period provides maximum rain to the area. July and August are the oppressive months due to heat intermixed with high humidity. The winter season is normally pleasant with low temperature. During this period western depressions sometimes give small quantity of rain, which intensifies the existing coldness into chill. The average annual rainfall for 51 years at Siwan is 120 centimeters ( 47 inches).

Places of interest in Siwan

Amarpur is a village situated 3 Kms. West of Darauli, in this village ruins of mosque of red bricks on the bank of river Ghaghara are still available. This mosque was build during the reign of Mughal Emperor Shahjahan (1626-1658) under the supervision of the Naib Amar Singh but the work was left incomplete. The village derived its name from the builder of the mosque Amar Singh.

Faridpur situated just near Andar is the birthplace of Maulana Mazharul Haque who played an important role during the freedom movement. Sadaquat Ashram in Patna, which originally belonged to him. He was a symbol of Hindu Muslim unity.

A block headquarter now is said to be have been founded after the name of Dara Shikoh the elder son of the Emperor Shahjahan. It name was Daras Ali, which later on was changed into Darauli. There is reminiscence of Mughal period ruins where a big mela is held every year on the Kartik Purnima.

1. A village in the Darauli block where there are remnants of a fort, which is said to be connected with the famous hero of the Mahabharat, Acharya Dronacharya the guru of both Kaurav’s and Pandav’s.

2. Where the Brahmin Dona built his stupa

Dona's stupa is a lesser-known but popular Buddhist pilgrimage site, despite its isolated location. The Buddhist traveler Hiuen Tsang mentions a visit to Don in his account of his travels in India. He describes the stupa as being in ruins. The account of Dona's distribution of Buddha's ashes and being given the vessel is a mentioned in the end of the Mahaparinibbana Sutta, which is described in Maurice Walsh's The Long Discourses. Presently Dona's stupa is a grassy hill and has a Hindu temple built over it, where a beautiful statue of Tara is worshipped as a Hindu goddess. This statue was carved in the 9th century. A.D. Tourists on a Buddhist Pilgrimage Tour are sure to appreciate the historic sight of the stupa at Don.

Don can be reached from Patna to Siwan via Chhapra. A day trip from Kusinagar via Gopalganj can also be arranged. 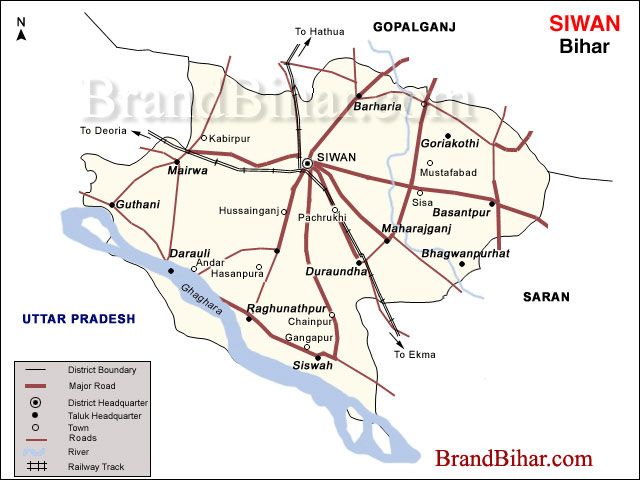