As the district has its border with Nepal, it has an international importance. The international border is open with five blocks of the district, namely, Bagaha-II,  Ramnagar,  Gaunaha, Mainatand & Sikta, extending from north-west corner to south-east covering a distance of 35 Kms.

This district has a  literacy rate of 39.63%. There are a few schools in the district which are amongst the best in North Bihar.

Agriculture is the main source of income of the people in West Champaran. Some agro-based industries have flourished here and are being run successfully. Sugar mills are established at Majhaulia, Bagaha, Ramnagar, Narkatiaganj, Chanpatia and Lauria. The last two units are closed  at present. Some rice mills are also being run successfully and the produce is being marketed to different places outside the district. Cottage industries based on local available natural and agricultural produce catering the local needs  such as Gur (raw-sugar), basket, rope, mat weaving etc are also popular. 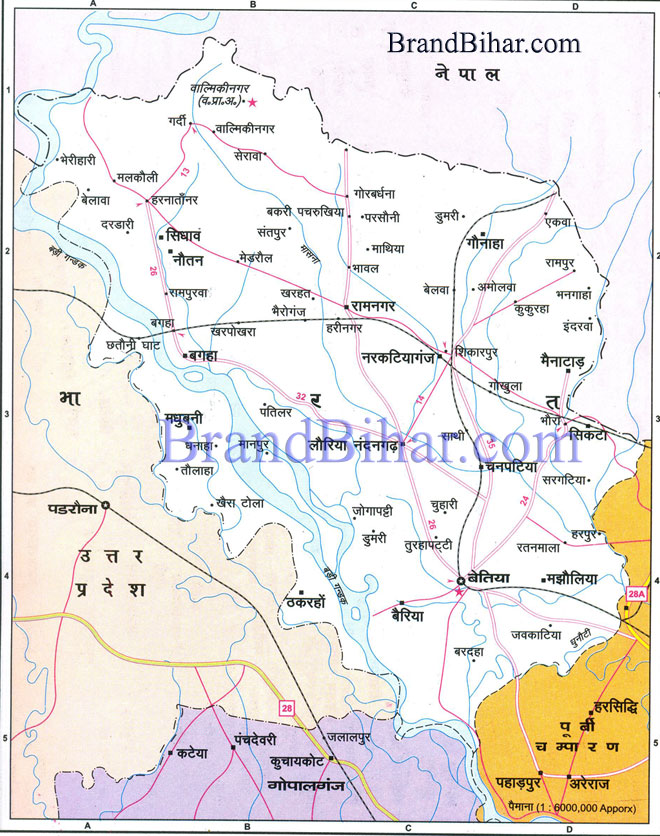 Land use pattern of West Champaran

The District is divided into few distinct tracts. The first consists of the hilly tract of Someswar and Dun range  in the north at  the foot hills of Himalayas.  It is noticeable that the soil even at the foot of the hills has no rocky formation and wherever water can be impounded,a rich growth of crop is possible. The hilly streams, however, play havoc by bringing down huge quantities of sand & destroying cultivable lands. The hills contain large stretches of forests.

Next to the hilly area comes the Terai region  which is largely populated by Tharus of the District.

The Terai region is followed by fertile plains occupying the rest of the district. This plain itself is divided into two well defined tracts by the little Gandak and have markedly distinct  characteristics. The northern portion is composed of old alluvium & has a considerable area of low land. It is traversed by a number of streams flowing southwards.  The southern portion of the tract is characterized by stretches of upland varied in places by large marshy depressions known as chaurs.

The Gandak or Narayani and Sikrahana  or little Gandak are the two important rivers of this district.

The climate of the district is cooler & damper than the adjoining districts. The terai area comprising mainly Ramnagar, Bagaha & Narkatiaganj is considered unhealthy while all other area have a healthy  climate. Winter begins in November and lasts till Feburary, followed by hot summer months when temperature rises  to maximum 43° Celsius. Rains set in during the later part of June. The district receives some winter rain also.

The district still lags behind in having sufficient communication linkage by metalled roads within its territory. National Highway 28 B cris-crosses this district. While  it is well  connected with the State capital by road.

The railways were introduced  in 1888 when Bettiah was linked with Muzaffarpur. The line was extended subsequently to Bhikna Thori on the Indo-Nepal Border. A line also runs from Narkatiaganj to Bairgania vai Raxaul. The construction of Chhitauni Rail Bridge has   resulted in a direct link of the district with Gorakhpur, Lucknow, Delhi, and Mumbai by train.

Bettiah and Valmikinagar have small airports with facility  for  landing of small planes. The airport at Valmiki Nagar is metalled.

The district has suffered large scale denudation of forests. Forests are confined to the northern tract & particularly the Sumeswar & the Dun ranges are covered with forests. Sal, Sisam, Tun & Khair are among the  trees found in this region.  In terai region clumbs of bamboo, sabai grass & narkat reed are found in abundance.

Three types of quails of the Amazonian species are seen in the district. They are the bustard quails, button quails & the little button quails. Brown fly-catchers, the grey shrike, olive green birds and various types of mynas are found here.

The rehu, naini, katla, tengra, buail, sauri and barari are the big fish varieties found in the bigger rivers & lakes of the district. Snakes are quite common and crocodiles and alligators are sometimes found in the larger river.

Tirhut, Tribeni and Done canals are the most prominent canals operating in this district. They get their water supply from  the Gandak river at Balmikinager, the northern most part of the district bordering Nepal.

This district depends a lot on livestock for cultivation. The plough cattle are bred locally. There are many fine well-conditioned bullocks seen in the district particularly the cart bullock . Buffaloes are main source of milk . They are generally of small type but in fairly good condition.

The Dun & Sumeswar hills in the extreme north which are the continuation of Shivalik range are formed of ill compacted sandstone. There are beds of Kankar (sandstone) in parts of the district  & saltpetre is found almost everywhere.

Rainfall is heavier than most of the districts & is especially heavy in the terai region. The normal annual rainfall is about 56".

The rich forests of the district have opened the doors of a flourishing trade in timber. The district borders Nepal on the north over a long stretch of land. There are some road routes also connecting the district with Nepal. Naturally, therefore, a good bulk of the Indo Nepal trade is carried on through the district. Nepalese rice, timber and spices are imported into India while textiles, petroleum products etc. are exported into Nepal through the district. The chief trade centres are Bagaha, Bettiah, Chanpatia & Narkatiaganj.

Places of interest in West Champaran

Formally known as BHAINSA LOTAN, it is a famous tourist spot where  a dam is built on the river Gandak (Gandak Project). This dam and its channels are the lifeline of north-western part of Bihar. This channel also irrigates some portions of eastern U.P. This dam is also generating hydro-electricity. This dam has been handed over to the nation by late Pandit Jawaharlal Nehru the then Prime Minister.  For any tourist interested in exploring natural beauty, a visit to the sylvan surroundings of Valmilki Nagar is a must, where the gushing streams of Gandak break the ascetic calm of the Himalayan foothills.

Bhainsalotan is also famous for Valmiki Ashram where Maharshi Valmiki, the author of the Ramayan is said to have passed some years. Lord Shiva temple, constructed by Bettiah Raj and  ancient Shiv-Parvati temple is also situated  here.

This is in the north-western part of the district under Bagaha-II Block and situated about five miles above the Valmikinagar dam. The confluence of river Gandak. Panchanand and Sonaha is an attractive place to see. This place is at the Indo-Nepal border. One bank of this confluence touches Triveni village of Nepal while another bank extends to Bhaisalotan village of India. The holy book “Srimad Bhagwat” describes that the thousand years battle between Gaj (Elephant) and Grah (Crocodile) was started at this place. Lord Vishnu appeared and protected the elephant. Every year a fair is held at this holy place on the eve of “Magh Sankranti” (Magh is the 11th month of the Hindu lunar calander and ‘Sankranti’ refers to the period of time when Sun enters into a new sign of zodiac. This occasion is also known as bathing festival in holy rivers. Thousand of devotees including old, women, children take the holy dip in this confluence.

A name meaning 52 forts, given to the remains of some old fortifications near Darwabari in Bagaha-II block about 8 Kms. from Tribeni. The place is also called Tripan Bazar . The remains of the 52 forts and 53 bazars are at a short distance to the north of the village. To the north-west across the swamp are remains of massive embankments which may perhaps have been intended to serve as reservoirs. No trustworthy informatrion is available as the history of Bawangarhi though legends abound.

A beauty spot located in Gaunaha block on the northern part of the district, is the last railway station on Narkatiaganj Bhiknathori  section.  Located in the midst of beautiful scenery, it gives a clear view of the snow capped Himalayas and the Annapurna peak in the winter. King George V  had visited this place for hunting. An attractive bunglow is still existent here.

A fort is situated on the summit of the Sumeswer hills, at a height of 2,884 feet above sea level, in Ramnagar block. The fort which stands on the edge of a sharp precipice, is now in ruins, but its remains are well defined and reservoirs cut out of the soild rocks, in which water was stored for the use of the inhabitants, can still be seen. From the ridge upon which Fort Sumeswer is situated. a magnificent view of the snow  and of the intervening valleys and low hills situated in Nepal can be seen . The ridge here forms the boundary between West  Champaran and Nepal. The great Himalayan peaks of Dhoulagiri, Gosainthan and Gaurishanker are all clearly visible, and the view is said to be, for extent, one of the finest obtainable from any place on the frontier line India.

Situated at a distance of 10 Kms. from Bettiah, in Gaunaha Block, this village had the honour of being the venue of the annual conference of 'All India Gandhi Seva Sangh' in 1937. It was attended by Mahatama Gandhi, Dr.Rajendra   Prasad and Shri J.B. Kripalani. From that time a basic school founded by Gandhiji, has been functioning there.

It is a village in Gaunaha block from where Gandhiji started his freedom movement that came to be known  as 'Champaran Satyagraha' in India history. The village houses the hut which is called Ashram and has become a place of Gandhian pilgrimage.

Nandangarh is situated in Lauria block while Chankigarh is situated in Narkatiaganj block. These are actually two big mounds which are the remains of palaces of Nanda Dynasty and Chanakya, the world famous economist, Nandangarh has also been conjectured as the ashes Stupa where the ashes of Buddha are said to have been enshrined.

About one kilometer east of Nandangarh in Lauria block is the lion pillar of Ashoka, over 2300  years old and is in excellent condition. This pillar is 35 feet in height and its base diameter is 35 inches and upper diameter is 22 inches. Its massiveness and exquisite finish furnish striking proof of the skill and resources of the masons of  Ashokan age. Two more such pillars with their capitals removed have been discovered in Rampurwa village, close to Gandhi's Bhitiharawa Ashram in Gaunaha block. One of their capitals, the bull is now in the National Museum at New Delhi and the other, the lion, is at Calcutta Museum.

Situated at a distance of about 6 Kms. from Bettiah town, Saraiya man is a lake which is a  beauty spot.  The water of this lake is  considered salubrious for digestion  because of  black berries (Jamun) planted on its banks which fall in the water. The lake attracts large varieties of birds.