Bihar has a tradition of festivals from time immemorial .Bihar as an ancient land has a long list of festivals and fairs which the people of Bihar actively take part in. The most famous festival of Bihar is Chatth Puja. Festivals always break the monotony of day-to-day life and inspire us to promote love and brotherhood and to work for the upliftment of the society.

Almost all civilizations have worshipped the ‘sun god’, but it has a unique form in Bihar. Chatth Puja is the only occasion where the setting sun is worshipped. 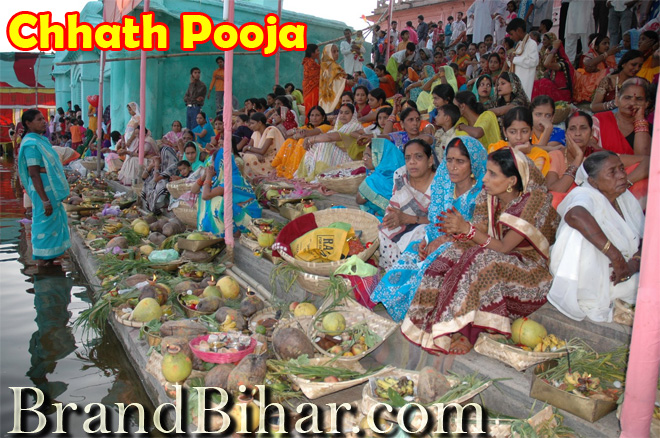 The people of Bihar have immense faith in this festival. It is celebrated twice a year. Once in Chaitra (according to the Hindu calendar) which falls in March and in Kartik which falls in November. For this 4-day festival, people maintain sanctity and purity from even a month ahead. People celebrate this festival with immense faith the folk songs sung in the honour of ‘Surya Dev’ and ‘Chatti Maiyya’ can be heard at every nook and corner the sweetness of the songs lets you feel the holiness of the festival.

Women fast for the good of their family and the society. Regardless of the social status, to celebrate this festival only the faith counts. Though it is a festival of the Hindus, some of the Muslims also participate actively in the puja.

It is during the winter season that the birds from the Himalayas migrate towards the plains. With the advent of these colorful birds, celebration of sama–chakeva is done. This is a festival especially celebrated in mithila. mithilanchal dedicates this festival to the celebration of the brother sister relationship. It represents the tradition of this land as well as the art of making idols. This festival starts with the welcoming of the pair of birds sama-chakeva. Girls make clay idols of various birds and decorate them in their own traditional ways. Various rituals are performed and the festival joyfully ended with the ‘vidai’ of sama and with a wish that these birds return to this land the next year.

A Hindu festival celebrated in all parts of the country. This is the auspicious day when lord RAMA was born. People celebrate it observing fasts and offering prayers in his honour.

Also known as Tila Sankranti, the festival marks the beginning of the summer season. People believe that from this day on, the days become longer and the heat of the sun also increases. Every year it is observed on the 14th of January. People celebrate it by giving offerings to the poor.

Bihula is a prominent festival of eastern Bihar especially famous in Bhagalpur district. There are many myths related to this festival. People pray to goddess Mansa for the welfare of their family.

This festival is celebrated all over mithilanchal with much enthusiasm. It is celebrated in the month of Sawan (Hindu calendar), which falls around August. This festival carries a message with itself. It teaches how to weave together religion and tradition in day-to-day life.

Basant Panchami, Shivratri, Raksha Bandhan, Holi, , Id, Bakrid, Christmas and many more festivals however big or small are celebrated with enthusiasm all over this landmass.