Chhattisgarh a state in central India was formed on 1 November 2000 by partitioning 16 Chhattisgarhi-speaking south eastern districts of Madhya Pradesh. Chhattisgarh is the 10th largest state in terms of geographical area, the third largest in terms of forest area and has the second largest mineral reserves. Chhattisgarh borders the states of Madhya Pradesh in the northwest, Maharashtra in the southwest, Andhra Pradesh (East Godavari District) in the south,Telangana .The state has a population of 26 million, more than three-quarters of whom live in rural and remote areas. The population density is 189 people per kilometre lower than the national density rate of 382 per sq km , making it one of least densely populated states in India, ranking 26th. The sex ratio of 964 females for 1000 males is higher than the all-India sex ratio of 914.

The literacy rate in Chhattisgarh has improved steadily from 42.91 per cent in 1991 to 64.7 per cent in 2001, to 71 per cent in 2011. The state has experienced a modest, but consistently positive growth in Gross State Domestic Product (GsDP). Chhattisgarh ranks 23rd in Human Development Index 2007-08 (HDI) out of 23. Of the total population of 26 million, 43.4 per cent represent scheduled castes and scheduled tribes, who live mostly in the thickly forested areas in the north and south of the state, and are largely involved in small-scale farming. As most of Chhattisgarhs disadvantaged people live in remote forested districts, they remain poorly served and show lower levels of development. Chhattisgarh is identified as one of the richest biodiversity habitats in India and has one of the most dense forest covers in the country. Rich in wildlife, the state is home to several species of exotic flora and fauna and abundant non-timber forest products, with tremendous potential for value addition.

There are several opinions as to the origin of the name Chhattisgarh, which in ancient times formed part of Dakshina Kausala (South Kosala). "Chhattisgarh" was popularized later during the time of the Maratha Empire and was first used in an official document in 1795.

Another view, more popular with experts and historians, is that Chhattisgarh is the corrupted form of Chedisgarh which means Raj or "Empire of the Chedis". 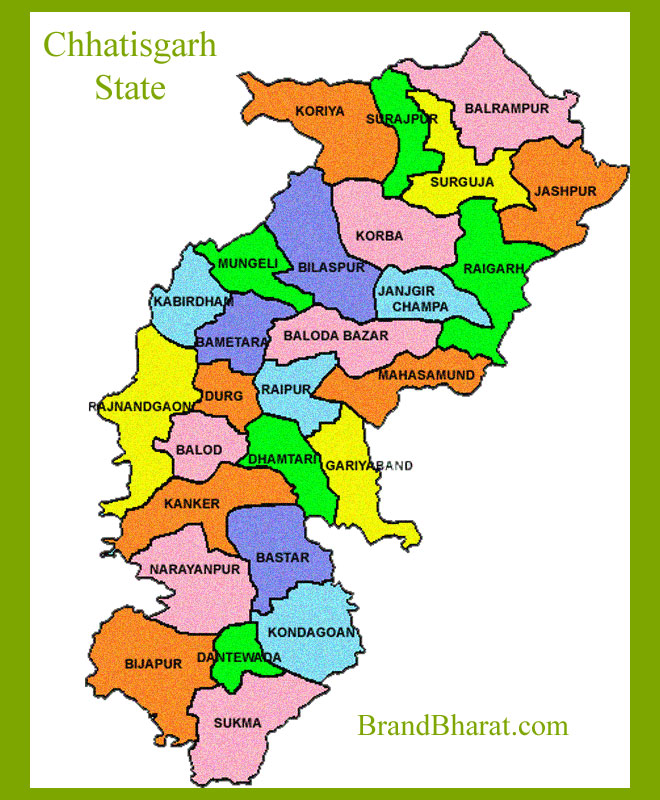