Jains are followers of the Tirthankar Vardhaman Mahavir, the last Tirthankar, who was born about the middle of the sixth century B.C. to a wealthy nobleman, Siddharth, of the Jnatrika clan in a suburb of the city of Vaishali. Siddharth was a follower of Parshwa, the twenty-third Tirthankar. Mahavir's Mother, Trishala, was the sister of the Governor of Vaishali and related to the ruling Lichchhavi house of Videh. In Mahavir's thirtieth years, his parents ended their lives, it is believed, by voluntary starvation. His elder brother, Nandivardhan, succeeded to the principality, while Vardhaman Mahavir renounced the world and became an ascetic. He was borne from home in a palanquin to the shade of an Ashok tree where he divested himself of his ornaments and fine raiment. From then on, for thirteen years, till the age of forty-three, he lived a life of extreme self-mortification. At the end of this period while he was in deep meditation under a shala tree on the banks of the river Rijupalika, he achieved the state called nirvana or kaivalya. He was acclaimed as a Kevalin (supreme omniscient), Jina (conqueror), Arhat (Blessed One), and Tirthankar (ford-finder). In a long wandering life of 42 years in north and south Bihar, he gathered a considerable following of monks, known as the Nirgranthas, or men who discarded all social bonds, who after Mahavir's death (c.490 B.C.) became known as Jains. 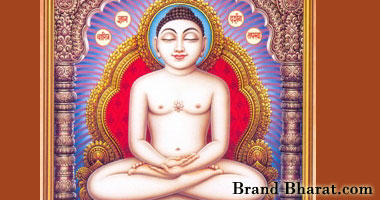 The Jains describe all human truth as relative and temporal, not absolute. Nothing is true for them, except from one point of view. From other points of view it would probably be false. All judgments, therefore, are limited and conditional; absolute truth comes only to the periodic redeemers or Jinas. It is not necessary to believe in a Creator or First Cause- for, said the Jains, any child can refute that belief by showing that an in created God is just as impossible as an uncreated or uncaused world. It is more logical to believe that the world has existed from all eternity and that its infinite changes and revolutions are caused by its own inherent powers rather than by the intervention of God. The universe- plants, animals and humans- is a plurality of jivas, all subject to the cosmic process or karma and rebirth. One can, however, free oneself through austerity and penance.

Mahavir is said to have breathed his last at a place called Apapa (Pawa) in Bihar. Besides, a large number of Jain monks too died on the famous Parasnath Hill, a mountain that takes its name from the twenty-third Jain Tirthankar, Parshwanath who is said to have attained nirvana by voluntary starvation on this hill, now in the Jharkhand state. In the Kalpa Sutra, this hill is called Sammet Shikhara, while in other Jain works it is referred to as the Samidagiri and the Mallaparvata, the former name being a corruption of Samadhigiri, a word signifying the mountain on which no less than nineteen of the Jain Tirthankars are said to have attained Moksha.

In the reign of Chandragupt Maurya, the chief pontiff of the Jains was Bhadrabahu (f.1.290B.C.), author of a biography of Mahavir. During a twelve-year famine, he led a migration of the Jains southward, as far as Mysore. After the famine the surviving emigrants returned to the north, but discovered that those who had stayed behind in Magadh had ceased to observe the rule of nudity and other essential Jain disciplines. A council was held at Pataliputra (c. 280 B.C.) with the object of reconciling the factions and collating the Jain scriptures. About the first century A.D., however, the split between the two principal sects became final on the subject of nudity. The 'white-clad' Shwetambar sect, who derived its authority from Parshwanath, consisted of the descendants of those who remained at Magadh during the great migration southward. They are found mostly in northern India. The other sect consisted have the Digambar or 'sky-clad' monks who went about nude and had migrated to the south during the famine. They held women in low esteem. Jainism gradually shifted from eastern India, spreading first to Mathura and Ujjain and then southwards. It was the main religion of the Kannarese-speaking communities for more than a thousand years and exercised an immense influence among the Rashtrakutas, Hoysalas, Kadambas and other people. Most of the Jains today are traders and bankers, especially well known among them being the Marwaris whose traditional home is Marwar in Rajputana.